The vast Hwange National Park sits between Bulawayo and Victoria falls and is the largest park in Zimbabwe covering a 14,500 km2 plateau dominated by Acacia woodland and Kalahari sandveld. The region features a gently undulating fossil river which stretches out to the Botswanan Makgadikadi Pans. The winds which sweep the Makgadikadi pans deposit sand in Hwange and ultimately shape the environment.

This expansive area is home to some of the biggest concentrations of wildlife in Africa and boasts huge herds of plains game including Zebra, Rhinoceros, Giraffe and Buffalo which are followed by large predators such as leopard, spotted hyena and cheetah.

Hwange contains all of the countries specially protected species including healthy populations of the rare brown hyena and African wild dog. The park is also famous for having one of the largest elephant populations in the world which increased in population from 4000 to 20 000 since the parks proclamation in 1930.

Hwange is unique in that there are no permanent water bodies and the man-made waterholes support large amounts of wildlife that are easy to spot because of their large numbers and the sparse surrounding environment. There are over 63 of these waterholes which offer the wildlife a popular respite from the areas arid surrounds and are well connected to a network of viewing roads which makes for an unforgettable yet accessible safari experience. During the dry summer months extensive water pumping fills the watering holes attracting a plethora of game from far and wide making them a favourite hunting ground of predators.

For an authentic safari experience, there is no better way than to go on a walking safari and see the animals, birds, trees, insects on foot. Game rangers and trackers in Zimbabwe go through rigorous, intensive training programmes and so you are safe and can be guaranteed some of the best in the industry.

One of our favourite camps is The Hide which overlooks a large watering hole and because it’s surrounded by a private concession visitors are able to explore the surrounds on foot which is not allowed in the rest of the park. The Hide is renowned for its hospitality and of course its exceptional hides which allow you to observe game without becoming an observer. 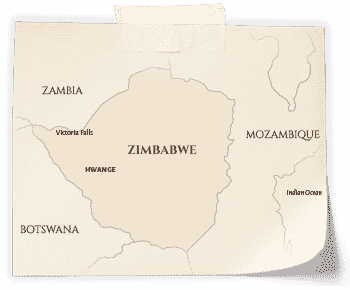