Namibia’s Skeleton Coast is shrouded in mystery and a place of great extremes; where the seemingly endless desertscape collides with a frigid and rugged coastline. The consistently rough seas and dense ocean fogs, known to the locals as ‘cassimbo’, plagued sailors of the past with legendary peril, and today the coastline is steeped in a fascinating shipwreck history.

This formidable and vast expanse which stretches from the Swakop River in Namibia to the Kunene River in Angola was described by the first Portuguese settlers as ‘The Gates of Hell’, whereas today it provides a remote sanctuary nearly untouched by man. It truly is a place which is perfect for travelers who want to get completely off the grid and experience nature at it’s most pristine.

Visitors to the region will be captivated by the awe inspiring moonscapes and fauna and flora which have adjusted to the regions challenging environment and turned it into a surprising oasis of unusual desert adapted life including the incredible desert lions,
black rhino and desert elephants. The Welwithcia tree, also known as a living fossil, is one such strange dessert dweller and has been found to live to an incredible 2000 years old.

The best camp to stay at is Hoanib Skeleton Coast Camp. Operated by Wilderness Safaris, it is the perfect base from which to enjoy an indepth encounter (in the company of excellent guides ) with the fascinating wildlife and phenomenon of this surreal corner of the planet.

We suggest that only way to access the Skeleton Coast is by aircraft, and, arriving from above, the aerial views of the sparse patterned landscape and adjoining turbulent seas, gives a powerful appreciation for the sheer remoteness of the area. Once on land, immersed in a landscape of endless vistas and towering sand dunes, the hustle and bustle of the outside world falls away and is replaced with a deep sense of peace of quite. At night the sky looms large with celestial bodies and immerses those below in the mysteries of our solar system and beyond, unbridled by even the slightest light pollution. 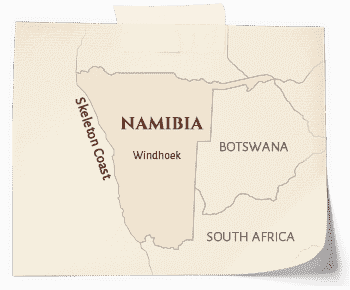 Grab the kids and head to the desert for a Namibian family adventure! Namibia’s vast landscapes and remote, otherwordly beauty are legendary and attract travellers from across the world looking for the solitude and unique sense of desolation it’s renowned for. However, there’s a whole different side to this desert nation, especially if you are Read More

For part 2 of our journey through Namibia, we’re travelling to Damaraland, the Skeleton Coast and Etosha National Park. (read part 1) A country of vast, dramatic landscapes, Namibia offers a totally unique experience that is at times either adventurous or spiritual – but always wholly rewarding. There is no better place to observe social Read More

Namibia, a land of endless space…

DID YOU KNOW?   Namibia is the second most sparsely populated country in the world and about half the size of Alaska, which makes it the perfect social distancing destination. There are various distinct areas to visit spread out over this immense country, ranging from Bushmen rock paintings and engravings in the Damaraland at Twyfelfontein or Read More

Namibia is the perfect honeymoon destination for couples wanting to get away from it all, relax in pristine wilderness and be blown away by fabulous accommodation and superb hospitality. The desert landscapes, the unusual flora and fauna, the humbling 360’ views, never ending sand dunes, no other people for miles and starry starry skies are Read More

In our fast-paced modern world with the constant barrage of inboxes and digital devices, time spent away on a digital detox in nature is often much needed to recharge the batteries and get back to your natural rhythms. From smartphones, ipads to laptops we carry our devices with us all day and they are often Read More

By Vanessa Ratcliffe on 23 August 2016 in Namibia

The idea of traipsing around the Fish River canyon in the heat and the dust did not seem appealing to our good friend Simon. But now, upon reflection, he looks back and smacks himself for even thinking of passing up the opportunity to see one of the great wonders of the African continent. He writes: Read More