Swakopmund is a popular coastal town in Namibia which was once a German colony. As a result the area is steeped in German influences from towering Lutheran churches, traditional butcheries and bakeries and plenty of Weiss beer at the Swaopmund Brauhaus.

The town lies on the vast skeleton coast which is where the frigid waters of the Atlantic Ocean meet the towering sand dunes of the expansive Namib dessert. This unique microclimate conjures up an infamous mist which wraps the area in mystique and provides an important respite from the areas ancient aridity – the Namib dessert is believed to be the oldest in the world. However, these mists offered no respite for early sailors to the area and the ragged shoreline is littered with historic shipwrecks.

Swakopmund is known as the adventure capital of Namibia and includes sand boarding and quad biking along its enormous sand dunes which lie just on the outskirts of the town. Boat cruises to see the thousands of pelicans and seal colonies reveal the nutrient richness of the icy waters which also attract many sharks to the area. Excursions to Sandwhich Harbour a protected wetland area show a unique ecosystem housing countless amounts of flamingos.

Exploring the dunes with a guide will reveal lots of interesting desert adapted plants including the ancient Welwithcia tree which can grow to over one million years old making it the oldest living thing and is referred to as a living fossil.

The Sossusvlei and the Deadvlei salt and clay pan is an easy (by Namibian standards) drive away and Swakop and is a good stopover destination that we often include on Namibian itineraries whether you are on a self- driving or a fly-in safari. Deadvlei was once an oasis replete with acacia trees which now stand as gnarled black trunks against the orange backdrop of sand dunes creating a surreal and haunting landscape. 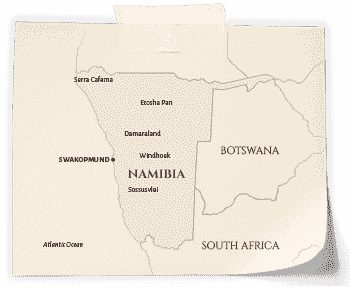