Tanzania’s Ruah National Park covers more than 20226 km2 making it the largest park in east Africa. It encapsulates a diverse variety of eco-systems and sits at the transitional point of two vegetation zones; semi-arid savannah dotted with skeletal baobab and acacia trees and Zambezian Miombo vegetation. Ruaha comes from the Hehe word ‘Ruvaha’ which means river as the Mzombe and Great Ruaha rivers traverse the region and dominate the natural landscape. The park also contains the rich wetlands of the Usanga basin which are recognized by Birdlife International as an Important Bird Area (IBA) and is said to contain more than 571 species of birds including seasonal migrants making it a veritable birding paradise.

The river systems are teeming with hippopotamuses and the menacing and crocodiles and its banks play host to a wide array of fantastical amphibians and reptiles.

There are only a few safari camps in Ruaha National Park and besides game drives and guided walks, a popular activity is fly camping. as fly camping. Fly camping is not for the frist time safari goer as the camp sites are rustic and simple. But nature lovers and safari aficionados will certainly appreciate being remote and surrounded by the sights and sounds of raw nature.

The remote ecosystems are almost untouched and are home to an array of larger-than-life mammals such as elephant, kudu and the distinctive Roan and Sable antelopes. Feeding on these are lions, leopards and cheetahs. Smaller predators such as bat eared, foxes, Jackals and the endangered African wild dog also prowl the park. The area is also gifted with majestic geological formations as it sits at the base of the Western Rift Valley and is home to a number of springs which attract plenty of game during the dry season. Rolling hills and rocky outcrops punctuate the horizon all around and are home to animals such as klipsringers (rock jumpers) and are a specialist hunting ground for leopards.

Ruaha Park’s hot dry climate concentrates animals around dependable water sources making predicating game movements far easier particularly in the dry season. Game viewing is best from May to November. However, the park takes on a lush green beauty during December and April and many of the game can still be easily spotted in the open woodlands area. 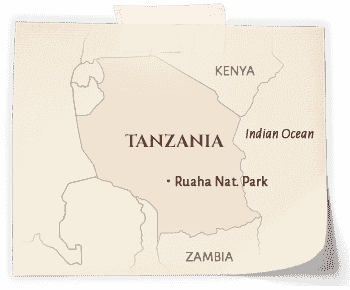