Zimbabwe is definitely back on the map as a travel destination and although there are still issues with the leadership of the country, the national parks, the wilderness regions and the hospitality industry in general is well managed. Safari guides for example go through a very rigorous training program me and as a result Zimbabwe boasts some of the best, most passionate guides in the region. The Zimbabweans themselves are known for their friendliness and welcoming hospitality.

The new International Airport at Victoria Falls now offers access to some of the most amazing safari experiences in Africa. The best view of the famous Victoria Falls is from the Zimbabwean side as it faces the majority of the towering basalt curtain of water which is the biggest waterfall in the world in terms of its combined height and width. The falls stretch for a staggering 1,7km! The Town of Victoria Falls is a short walk away from the viewing points which allows visitors to explore the falls at their leisure. Bungee jumping, river rafting and elephant back safaris are some of the unforgettable adventures the area has to offer.

The vast Hwange National Park is the largest park in Zimbabwe and contains all of the countries specially protected species. The expansive savannah and Mopane woodlands boast huge herds of plains game which are followed by large predators such as leopard, spotted hyena and cheetah. The park is famous for having one of the largest elephant populations in the world and the rare brown hyena and African wild dog have healthy populations in the park.

Mana Pools National Park is famed for its remote wilderness and is one of the least developed National Parks on the continent. Mana Pools is derived from the Shona word for ‘four‘ and is dominated by four ox-bow lakes. Long Pool is the largest at six kilometres long and is home a large number of hippopotamus and crocodiles. The thick lush vegetation which surrounds the pools and wetlands are teaming with birdlife and the banks of the river attract a host of animals including elephants, water buck, buffaloes and monkeys. Mana Pools is also well known for excellent canoe safaris.

Other attractions in Zimbabwe include the impressive remains of the late Iron Age Shona Empire at Great Zimbabwe which stand as a testament to Africa’s pre-colonial achievements and the expansive Kariba dam. 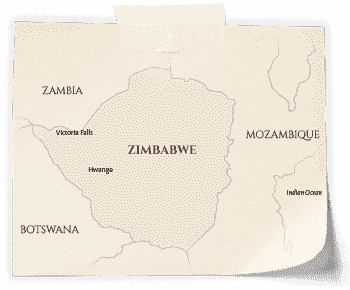 Mana Pools sits on the southern banks of the mighty Zambezi River in Zimbabwe and is named after the Shona word for ‘four’ as the area has four large pools, or ox-bow lakes, which lie inland and which once formed part of the river. Long Pool is the largest pool and at six kilometres long and is home a large number of hippopotamus and crocodiles and other marine animals. Read More

Victoria Falls borders Zambia and is one of Zimbabwe’s most popular destinations and for good reason. Zimbabwe enjoys some of the best views of the spectacular Victoria Falls because it faces the majority of the towering basalt curtain of water.This is despite the fact that there are no mountains for many miles but only a flat plateau that extends as far as the eye can see. The main falls, menacingly named the Devil’s Cataract, funnels over 500 million litres of water per minute in the peak season. Read More

The vast Hwange National Park sits between Bulawayo and Victoria falls and is the largest park in Zimbabwe. Hwange contains all of the countries specially protected species including healthy populations of the rare brown hyena and African wild dog. The park is also famous for having one of the largest elephant populations in the world which increased in population from 4000 to 20 000 since the parks proclamation in 1930. Read More