By Vanessa Ratcliffe on 27 September 2022 in Blog

It’s the most iconic bucket-list travel experiences in the world – the Great Migration, when around two million wildebeest move on a long, circuitous route across the great plains of East Africa from Tanzania’s Serengeti National Park to Kenya’s Maasai Mara. But which to choose? Let’s look at both…

What’s the difference between the Maasai Mara and The Serengeti?

East Africa’s great plains are simply breathtaking – seemingly endless landscapes studded with acacia scrub with vast skies above, stretching as far as the eye can see towards distant horizons… Spanning two countries, this is one of the most biodiverse regions on the African continent, known as the Mara-Serengeti ecosystem.

Unfenced and untamed, this is the stage on which what’s known as the greatest show on earth is played out each year with the mass movement of wildebeest and zebra as they follow the rains and fresh grazing, giving birth to new generations along the way, with thousands falling victim to predators and the forces of nature. 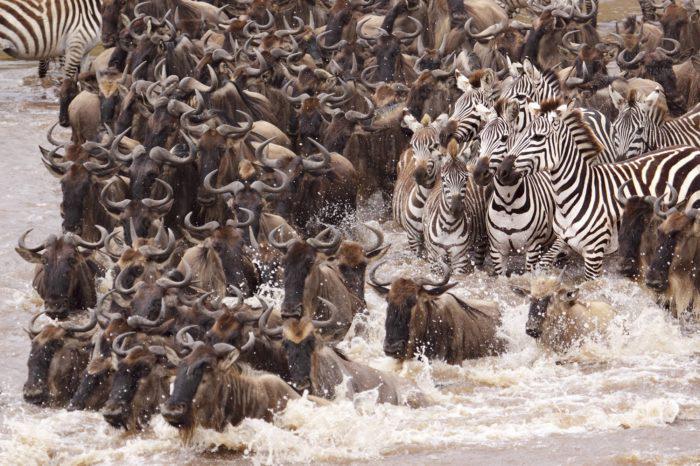 At the centre of the drama is the meandering Mara River which becomes a roiling, turbulent barrier filled with huge, hungry crocodiles that has to be crossed several times in order for the migrants and their young to reach fresh grass. It’s an arduous journey that gives rise to unmatched safari experiences, the likes of which are found nowhere else. 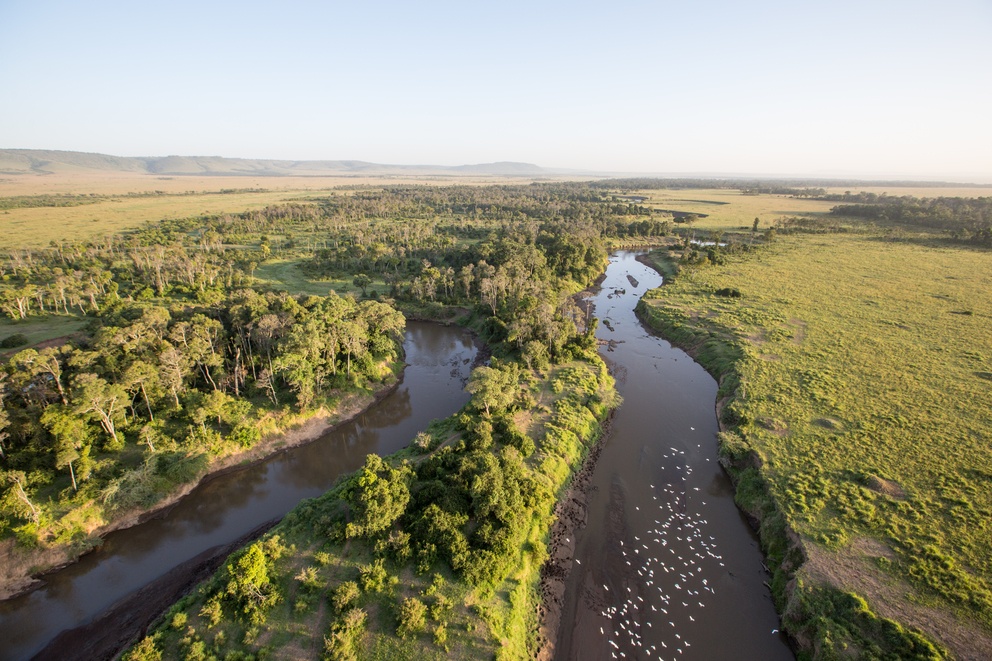 Located in the north of Tanzania and sprawling over 5,695 square miles of pristine wilderness, this huge swathe of land is named for the local Maasai word for “endless” – siringet. Renowned for its rolling grassy plains, it’s also home to riverine forests and dense woodlands around the Grumeti River in what’s known as the western corridor.

A safari in the Serengeti at any time of year is going to give you the opportunity to see excellent sightings of lion, leopard, elephant and buffalo. Rhino are also found here but are much harder to spot. You’ll also see cheetah, striped and spotted hyena and jackal aplenty. Apart from the ubiquitous wildebeest and zebra, you’ll also find the endangered Maasai giraffe, eland, a range of gazelles and antelope here, as well as more than 540 bird species. 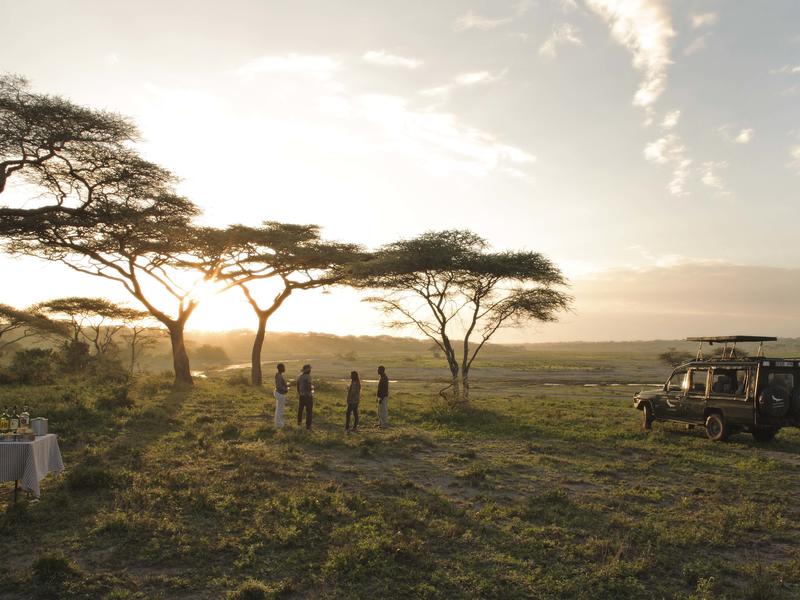 Much smaller than the Serengeti, at only 581 square miles, the Maasai Mara’s Central Plains area is where the bulk of the Great Migration action takes place and is home to the majority of camps and lodges. Due to its size, it’s possible to cover a lot of ground in a relatively short space of time and the concentrations of wildlife are high all year round. The downside is that the Mara can feel a little crowded, especially at the height of the migration.

The Mara is located in south-western Kenya and makes up the northernmost quadrant of the Mara-Serengeti ecosystem. It’s mostly rolling grassland and savannah, with three major rivers crossing it – the Mara River, Sand River and the Talek. Along its western border the topography changes to the more dramatic escarpment of the East African Rift.

It’s smaller size means that the Mara has some of the greatest concentrations of wildlife in Africa and it has become legendary for its big cats, especially where lion are concerned. With abundant prey species all-year round, the Mara’s lions are huge and impressive.

You’ll also find leopard, hyena, jackals and bat-eared foxes here, as well as more than 470 bird species, 60 of which are birds of prey.

Activities in both the Serengeti and Maasai Mara include game drives, hot-air ballooning, Maasai cultural experiences and in the private concessions around the reserves you can also do night drives and walking safaris as well. 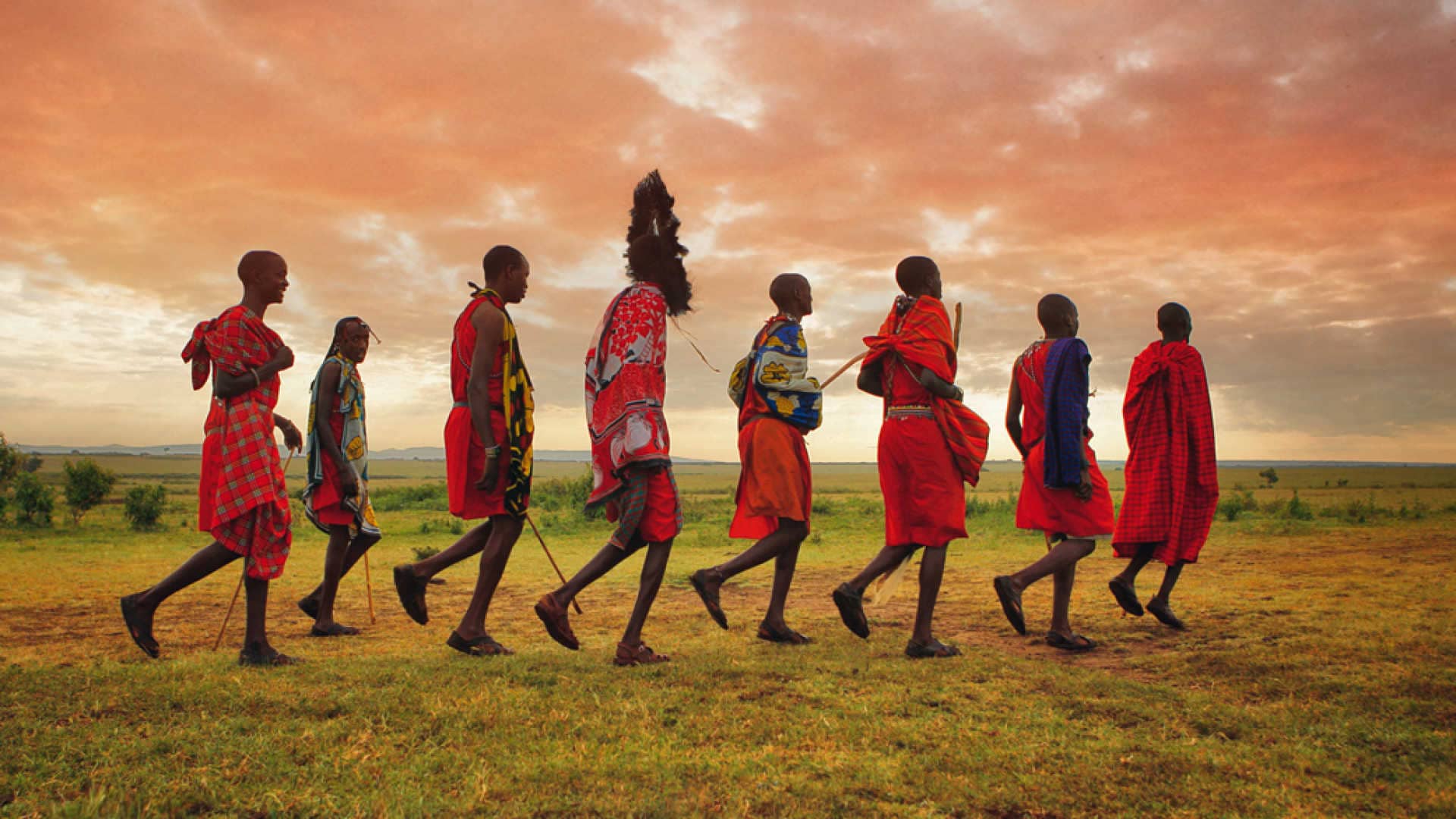 Of course, the reason for visiting both areas is primarily the Great Migration and while the movement of the herds is dependent on the rains and sometimes hard to predict as a result, generally the following timeframes apply…

To the Maasai Mara

Peak season is from July to October each year when the wildebeest and zebra numbers are at their highest, before they begin to move southwards to the Serengeti again.

But outside of peak season, between November and April, the birding is phenomenal and the more remote Mara Triangle region is exceptional for escaping the crowds, as are the numerous, more exclusive conservancies that surround the Mara.

The Great Migration peaks during January and February each year when the wildebeest calf in the southern section of the Serengeti. Usually by June the calves are strong enough to follow the herds north to better pastures and move through the Western Corridor, crossing the Mara and Grumeti rivers from late June through July into the Maasai Mara. 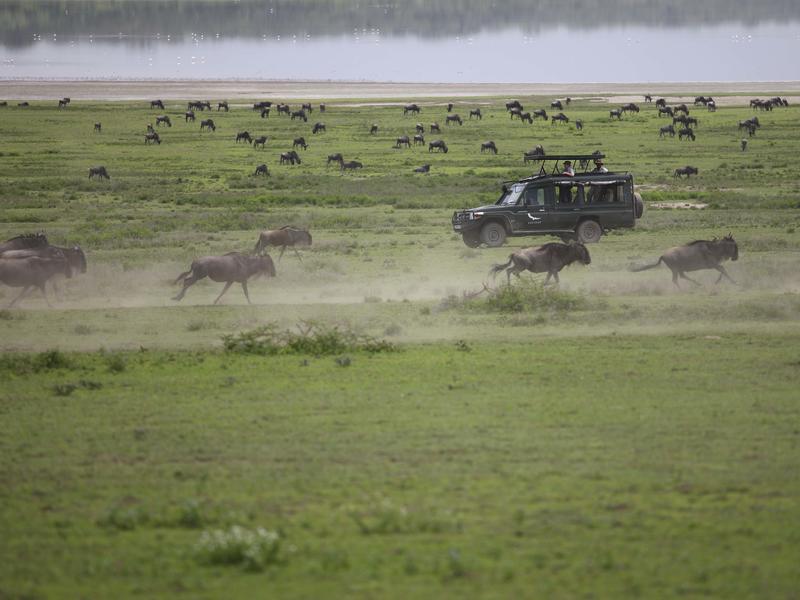 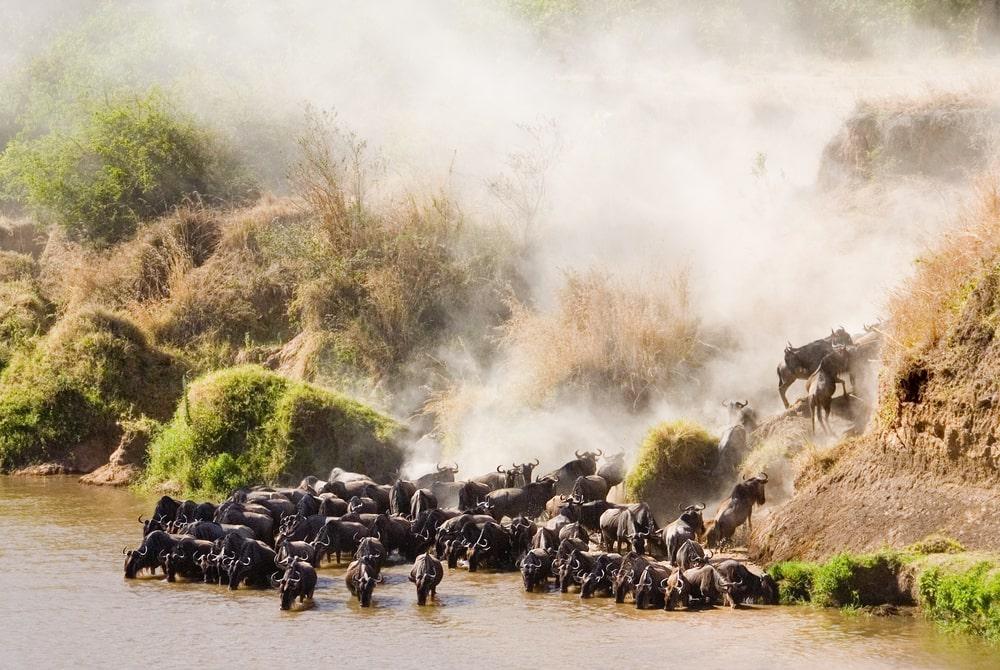 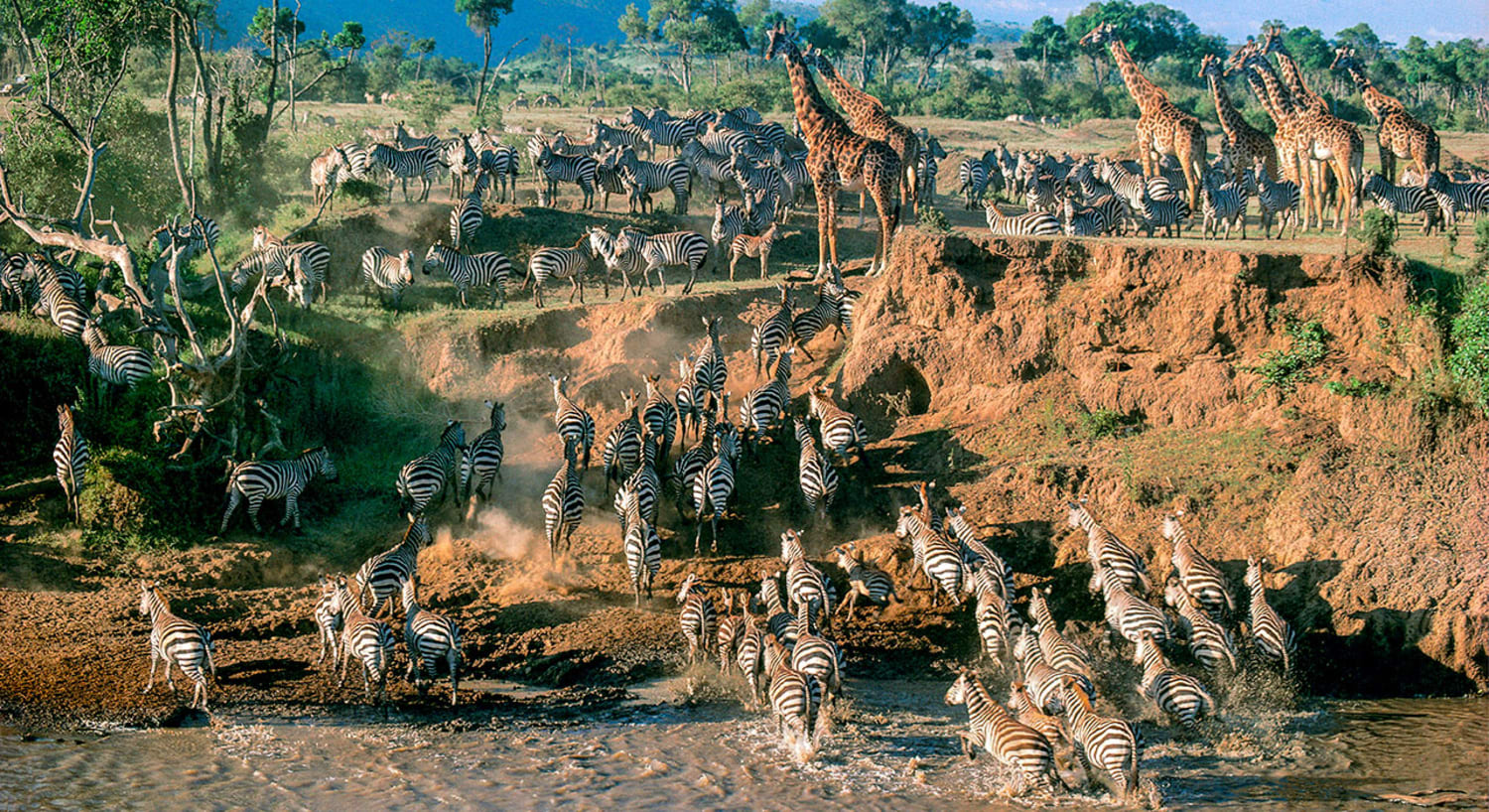 One thing’s for sure, there’s a lot to consider with so many options. the classic East Africa itineraries that we create often include both the Mara and the Serengeti and also include the Ngorongoro Crater as well as chill time on a beach in Zanzibar at the end.  everything hinges on what’s on your bucket list, when you can travel, how many days you can be away form your big city life and your budget.  We’ll work with these considerations and put together a dream safari.

We can’t wait to start planning with you!  Get the conversation started.  Email  hello@africansafaris.com