I recently joined a Wilderness FAM trip to Botswana. It has been a few years since I have been to Botswana, so I was very excited. We arrived into Maun and headed over to the Wilderness Safari’s air-conditioned lounge (which was very welcome in the heat of November).  We enjoyed some refreshments while we waited for our seat rate charter flight into the Okavango Delta. After some delays due to lost luggage, we flew to our first camp, Chitabe Lediba. On arrival we were met by our guide and transferred to camp. The camp is basic but perfect. The rooms are very spacious and have everything you need. Chitabe Lediba is right next to Chitabe Main which is a slightly larger camp with a few more common areas than Lediba.

The game viewing in the Chitabe Concession was phenomenal.  Like nothing I’d ever experienced.

We saw 6 female lions running, play fighting and generally frolicking alongside our game drive vehicle, carrying on as if we were not even there!  Shortly after that we saw a pride of 22 lions including cubs of all ages. We spent about half an hour  with a leopard who strolled lazily through the bush, then climbed up on top of a termite mound to get a better view and then finally settled languidly on the branch of a tree.

The Chitabe Concession is a photographer’s paradise.

From Chitabe we flew to the Vumbura Concession where we stayed at Vumbura Plains South Camp. There are two Vumbura Plains Camps; North and South. The main difference between the two camps is that Vumbura North is situated right on the water and North also has 2 Family Suites. Vumbura South has had a refurbishment since I last visited and looks really lovely. They have brought the waterways of the Delta into the rooms as you can see in the images below.

There had been some rain a few days prior to our arrival at Vumbura so the game had dispersed. That being said we still had some great sightings. 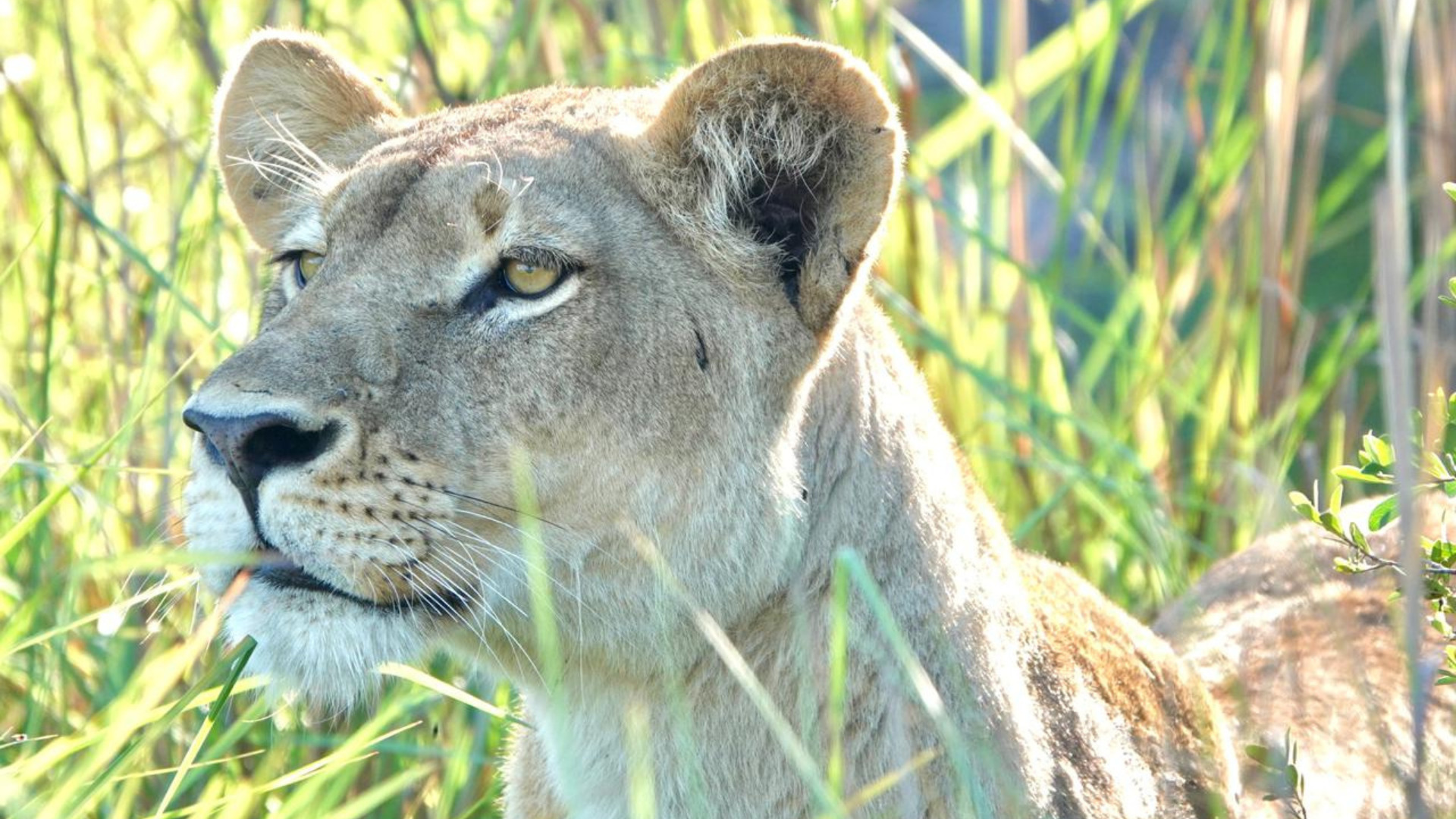 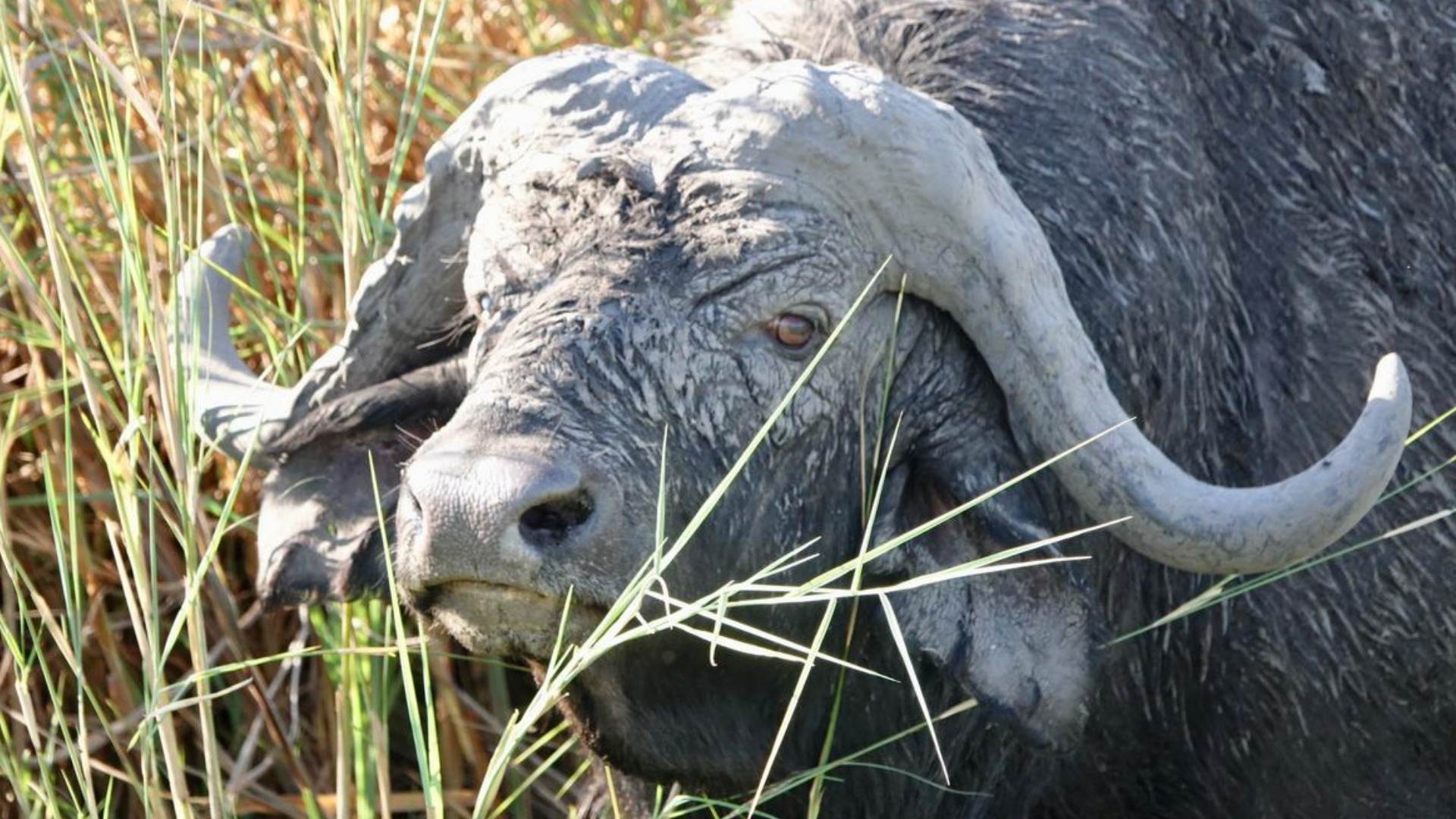 The highlight of our stay was the mokoro ride. We were floating along peacefully and suddenly our poler dropped into the mokoro. There were lions on the bank up ahead of us. It was the second time in our polers career that he had seen lions from a mokoro. Needless to say we turned around immediately and had an early sundowner! 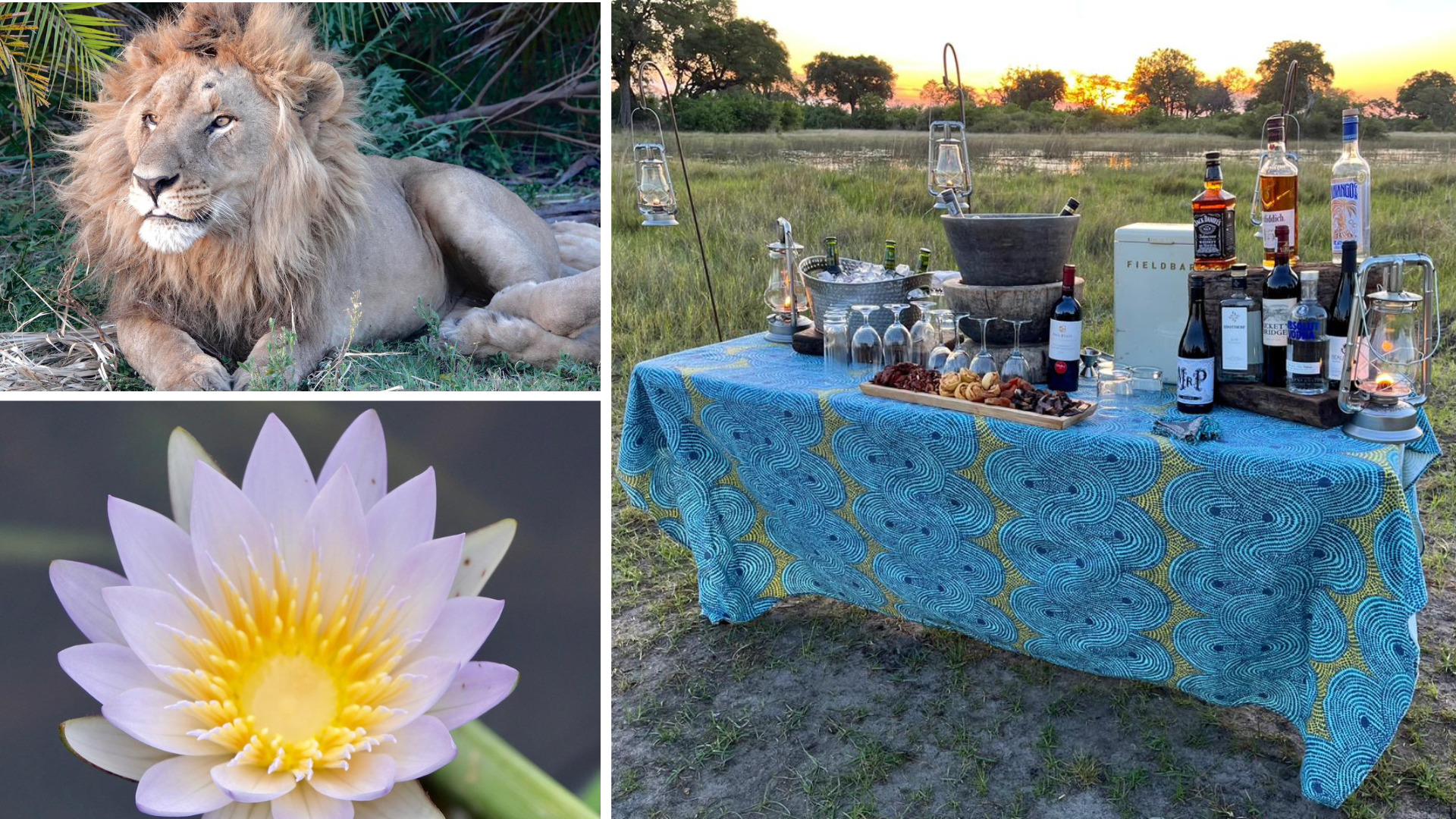 The last camp on our FAM trip was Jao. It certainly was the ‘grand finale’! The word that kept coming out of my mouth was ‘wow’. From the full-size giraffe in the library on arrival to the futuristic looking swimming pool area, to the rooms (where I can promise you, I got my 10,000 steps getting from one side to the other). If it was me travelling, I would be happy to spend 3 days just relaxing in my room, on the swing bed on the balcony, dipping in and out of the private plunge pool while watching the game on the plain in front of the lodge.

I think Jao is the perfect place to end a safari. 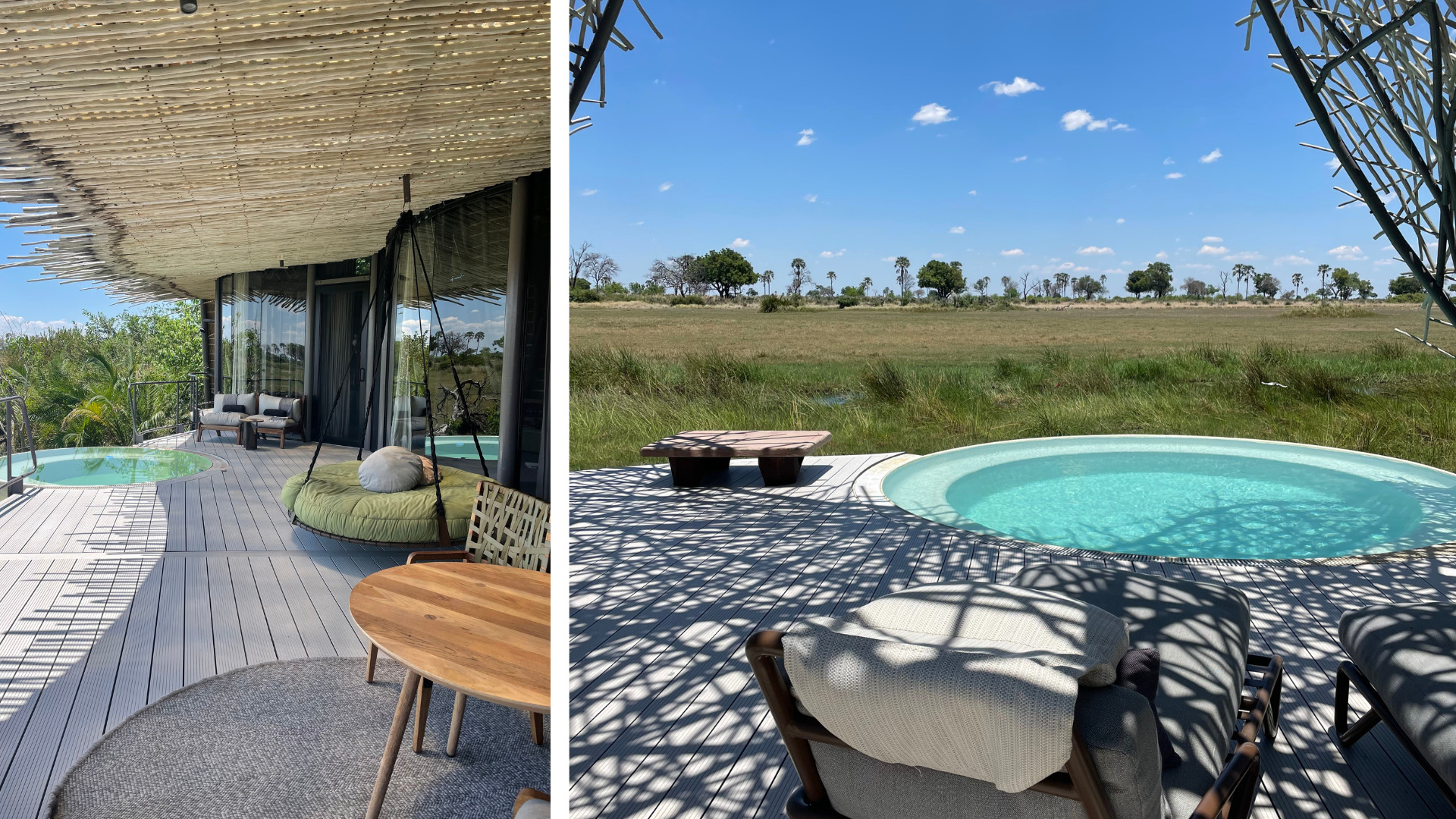 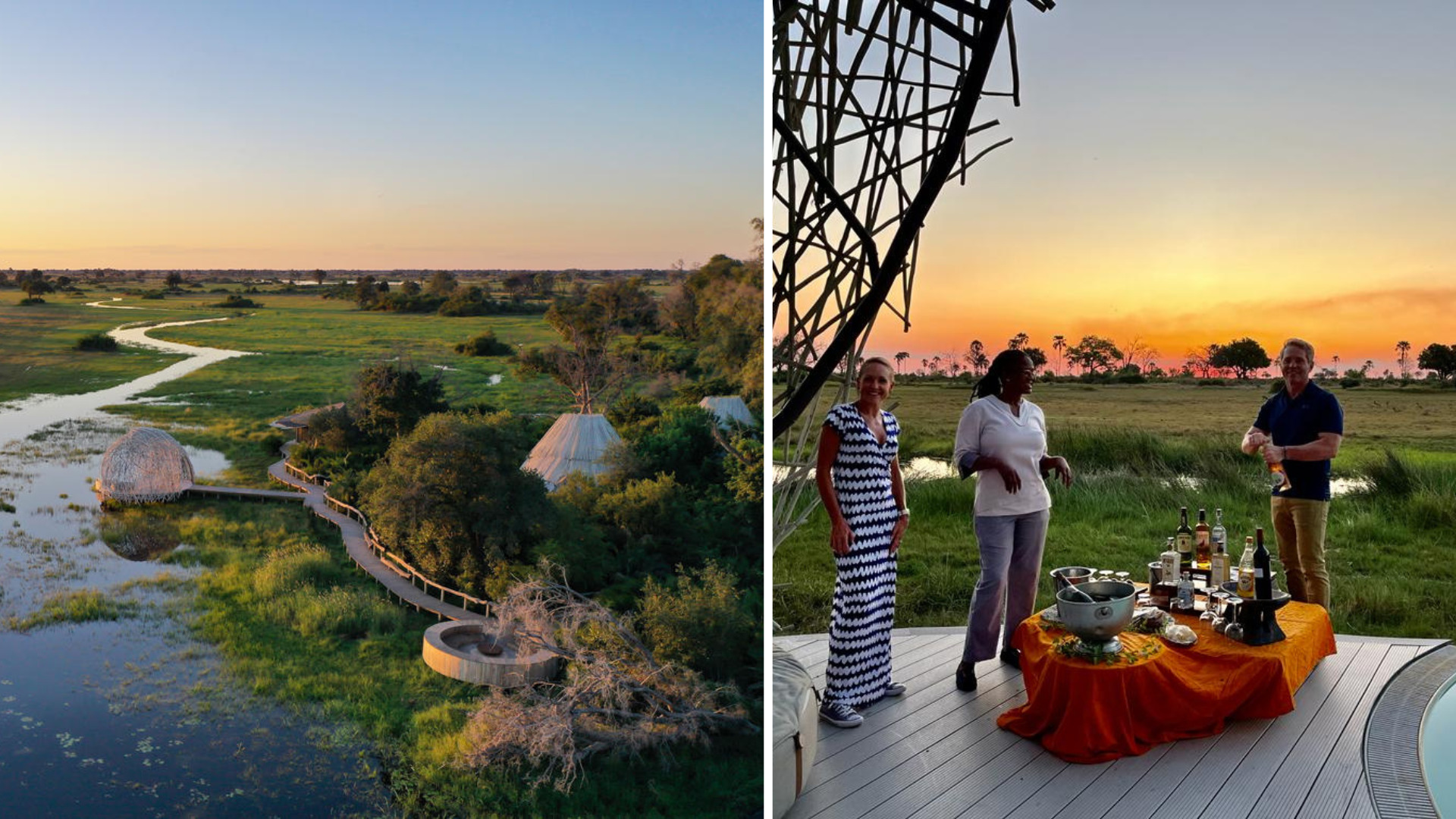 If you’d like to know more about how to include Botswana in your Africa trip, or would like more detail about where I stayed, send an email to camille@africansafaris.com