By Cameron Duncan on 9 March 2012 in Blog, South Africa

Last week Thursday, my colleagues and I were due a company lunch to talk Social Media and the like. Our Chief Safari Guru, Jeff, was down from New York for the week and was itching to do something a little different. Jeff had recently heard from a friend of his in New York about this amazing gem smack bang in the middle of Gugulethu. That gem is Mzoli’s…

Mzoli’s began life in 2003 as a humble butchery serving the community of Gugs (as Gugulethu is affectionately known) where it’s owner, Mr Mzoli Ngcawuzele himself, was born and raised. Mzoli prides himself on his choice cuts, so it wasn’t long before news of the little butchery spread amongst residents of the area. Before Mzoli knew it, business was booming! 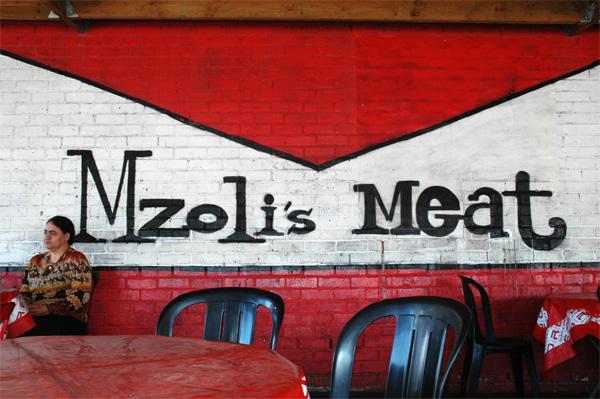 The quality of the meat was undisputed, but there was one question that a lot of people started asking – “don’t you have a braai (barbeque) to cook this meat?”. The concept of a ‘buy and braai’ is not a new one in South Africa. It entails buying your meat from the butcher and then cooking it yourself on the supplied open fire outside. Mzoli’s took the concept and modified it slightly and became the thriving chis’inyama it is today.

After parking your car in the vibrant streets of Gugs, you make your way to the entrance of Mzoli’s which remains as it used to be. It’s essentially a butchery where you select your cuts of the finest meats ranging from lamb shank to beef steaks to chicken pieces. It’s all there, and it’s all amazing! Aside from the meat, Mzoli’s do a mean ‘pap’ which is a traditional African dish made from maize meal. After paying for your meat, pap and soft drinks (Mzoli’s is unlicensed) you hand your slip and tray of meat to the friendly braaimasters in the backroom and make your way to the dining area.

The dining area of Mzoli’s has grown rapidly since the early days. There are tables and chairs enough to accommodate the masses of crowds that the place attracts. The Cape heat is kept at bay by misters throughout the shaded area while a DJ spins the latest in deep house and kwaito (music from the South African townships akin to hip hop). The vibe is amazing! People from all walks of life frequent Mzolis so at any one time you can expect to see Gugulethu residents, Capetonians, and local and international tourists alike all mixing and mingling. Everyone enjoys themselves at Mzoli’s!

Fifteen minutes after seating ourselves, and our stomachs began grumbling. I return our slip to the braaimaster who hands me back our tray of perfectly cooked meat. Now I consider myself to be something of a pro when it comes to the art of flame grilling meat, but I am but a humble apprentice to these men. The meat was flawless! Mzoli’s secret BBQ sauce was delicious and everything went down a treat with the cold beer I purchased from one of the local ladies nearby. There was not a morsel left on anyone’s plate, which was testament indeed to just how good the food is.

Having been to Mzoli’s about five times, I have not once been disappointed. The location gives one an authentic township experience and the food is about as good as you’re ever likely to get. Jamie Oliver, Coldplay and every other celeb visiting Cape Town can’t be wrong. I know for a fact that it won’t be my colleagues first and last time either…