By africansafarisblogadmin on 4 July 2011 in Africa, African Safaris, South Africa

There is so much in the news at the moment with regards to Rhino Poaching.  It’s hard to work out if we are winning the war or losing it, but there certainly are many people involved in fighting this terrible trade.  I was in a book store over the weekend in Cape Town and there, on the counter at the till, was a little pack for R30 ($4.45) – Rhino Force.  It’s a small beaded bracelet and a way you can help support this worthy cause. The bracelets are the work of Afrika Expiditionary Force – https://www.afrikaforce.org.za/ – proceeds from the bracelet help to create employment as well as fight Rhino Poaching.  Many of the people involved in creating the bracelets help look after children orphaned by AIDS, so this is a lifeline for them too.

The South African National Parks (SANParks) has revealed that 193 Rhinos have been killed so far this year and total arrests for the year are 123.  The poaching figure is scary when the number of Rhinos poached in 2010 for the year was 333, with total arrests sitting at 165 (slightly encouraging)!  Are we really winning this war?

On Sunday SANParks announced the stepping up of patrols in the Kruger National Park, which is home to 60% of the South African Rhino population.  The idea with the increased patrols is a bigger effort to stop poachers and the spreading of poaching into the surrounding private reserves.

93.4% of all African rhinos are in South Africa, so we have a huge responsibility to keep these wonderful animals safe for our future generations.   But it is not only about future generations, it is also about the inhumane way these animals are poached, most having their horns hacked off and left to bleed to death in agony.  The footage out there is gut wrenching and definitely not for sensitive viewing.  I have to take my hat off to the guys on the ground dealing with this every day.  I don’t think it is a job I could do. 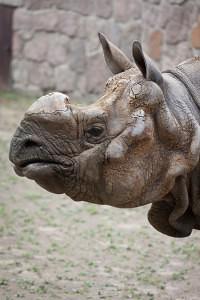 Please help support – there are many ways to support with other organizations like Save the Rhino or WWF– Rhino Campaign, that you can get involved with.  The more we have joining and supporting the more chance we have of fighting the poachers.  And the more chance you have of enjoying these magnificent animals on your next African Safari!